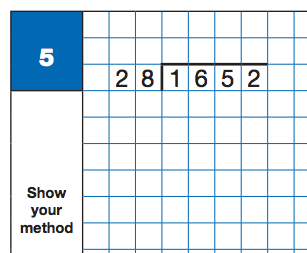 I have a problem with Long Division! 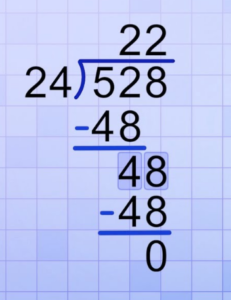 What I do have a problem with is the number of text books and websites which, I think, miss the point.

Long Division is Not Easy

Long division is a system or algorithm normally used for solving problems which involve larger numbers. It is learnt after pupils have already experienced short division and have a good knowledge of multiplication facts. Pupils are generally required to work out the multiples of the divisor in order to answer the question, so you could end up trying to work out your 17 times table or worse. What we are asking pupils to do is not a simple task, but a quite ‘long’ series of steps which lead to a solution. Moreover we know that it can cause confusion and there are many points at which a pupil can make a wrong turn.

The First Rule of Long Division is…

And this is where my problems begin. Division problems can often be simplified in a number of ways, and searching thorough numerous text books, even new ones from popular publishers, I find that many, and sometimes most, of the questions can be performed much more easily by simplifying them first.

The page has one more ‘good’ example which does not factorise at all, but then sets the pupils 9 questions to do, all of which can be simplified by factorisation. 7 of them then turn out to be short division problems, and only two end up as long divisions problems, however now much easier to solve.

That’s the Internet. The publishers must be better.

Well, a few years back a new scheme came out for the 2014 curriculum which many schools bought into. It had 15 questions on long division for pupils on one page, and again all but 2 could be completed by means of factorising to simplify the question. Many of my level 5 pupils could do them in their heads. 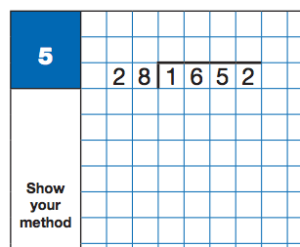 Surely the Government know what they’re doing! I mean, since they are insisting that pupils use long division to gain the extra mark if they don’t get the correct answer, they must .

I’m afraid there is no better news here. Back in 2014 the government produced sample materials to show teachers the new requirements, layout and mark schemes.

The only division question on the example paper (Q5) was 1652 ÷ 28 laid out encouraging pupils to perform long division.

Why do you want me to do long division? Why would you reward a pupil for making a mistake when they have chosen probably the worst method of performing this question? 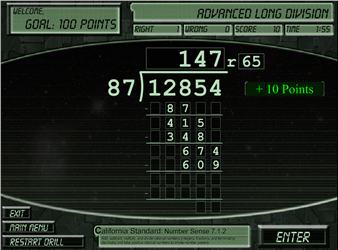 So let’s give pupils a division toolkit.

And surely let’s remove straight jackets which say that problems must be solved with a hammer, even if the screwdriver might have been a better option.

Sorry. No data so far.